Thought I would share this from the South Dakota Game and Fish:

Duck numbers in the Northeast have remained fairly steady over the last week with some large concentrations of mallards staging up on the big waters. Other puddle duck numbers are low with most migrating south due to the waters icing up the last couple weeks. Some pintail, gadwall, and green-winged teal can still be found. Diving duck numbers are low as well with the frozen state of most waters. The ducks that are here are keeping areas open mainly on the big water. With that being said, warm weather this week has been deteriorating the ice and more open water is available by the day so ducks are dispersing some.

Hunters targeting corn fields are having mixed success depending on the day and if the ducks are going out to feed before sundown. Windy days have been better to get the ducks moving.
Weather this week has been warm with highs in the mid 40’s to near 60 degrees. The extended forecast does not look to be severe enough to move many mallards out. There is no snow cover so ample food supplies are available.

Snow goose numbers are very high right now with large concentrations found throughout the Northeast. Geese are also using the large water bodies to roost and feeding in area fields. Great opportunity exists right now for both pass shooting and decoy hunting. Canada geese remain strong in numbers and are also hitting the corn fields. Very few swans have been seen this past week as most have left.

East Central
And the rollercoaster in temperature continues.
As of mid-week most wetlands and lakes began to open back up with highs in the 50’s and 60’s several days. Lake Thompson has remained completely open north of the Oldham grade Monday with good numbers of divers seen. Light goose number are at or near peak with concentrations near any large staging areas.

Mallard numbers across the area are good with most birds remaining in large flocks on big water.

A cool down is in store for next week with lows in the teens and highs in the 30’s that should begin the lockup.

Sioux Falls/Lower Missouri River Area
It’s been pretty quiet down in the SE.

Average Canada goose numbers, but the big mallard push is not down this far yet. Snow goose numbers are very slowly building. The birds are still only mostly feeding in the evenings and right at sunset. Most hunters who are having success are people hunting water or hunting snows in the fields.

The MO river has been VERY slow with hardly any good reports coming from down there.

All water is currently open with this warm spurt we are having.

Pierre Area
The Pierre area remains slow for much of a migration. A few Canada geese have moved into town the past couple of weeks, but they have remained in town grazing on grass on the softball, football and baseball fields along with the grass around the capitol complex. There has been a small migration of mallards on Lake Oahe which gives those hunting on the water an opportunity since they have not been out to feed during legal shooting hours. Reports from below Pierre are that there are a few smaller pockets of geese however there are no reports from hunters. There are good numbers of geese towards Chamberlain and south not sure about hunting success.

I've always appreciated SDGFP's reports. Honest reports from general locations, yet not super specific except a few locations. Just wish they had more than one or two reports from western SD in a season.
H

I'm not risking it. We'll be out hunting Fri. Only hunted about 10 days this year due to the ridiculous Late Zone start and weather in the 60's n 70's, missed two whole weekends. If this Storm pushes anything out of SD at all we'll be there to greet them. Not missing a front this late in the season. Like Charlie Brown waiting on the Great Pumpkin.......
N

The heaviest snow accumulation keeps drifting north. Where we are hunting tomorrow was calling for 5-8" just two days ago, now they are saying an inch tonight and less than an inch tomorrow. At least the roads should be ok for travel, hoping it's snowing heavy enough while we are hunting that it keeps the birds lower.

nebgoosehunter said:
The heaviest snow accumulation keeps drifting north. Where we are hunting tomorrow was calling for 5-8" just two days ago, now they are saying an inch tonight and less than an inch tomorrow. At least the roads should be ok for travel, hoping it's snowing heavy enough while we are hunting that it keeps the birds lower.
Click to expand...

Same has happened to the forecast for the east side of the state. What was a forecast for 1-3" is now rain turning to snow with less than 1". Just par for the course this season...
N

Honestly just a change in the weather should help us all out to a degree, as long as there are some birds around.

This storm is developing basically right on top of the state. I doubt much migration will happen with it. Should move birds around some though. If the weather holds true, the week before/of Christmas should be good for those with open seasons still.
#23 all the way.

70° and tornado here in ILLINOIS this is ridiculous. Never gonna kill a goose this year
Now is the time for all good men to come to the aid of their country
N

Yesterday turned out great after low expectations! Didn't actually see too many ducks, but the ones we saw worked excellent. At first they kept landing off to our left side so we moved the blind, that seemed to help but then we had a flock of four greenwings come right into the pocket of the decoys, which was now on our far right side. They came screaming past at mach 3 and all I was able to do was wound one enough that it came back and landed and then I had to go shoot it again. Not the prettiest display of shooting, but other than that we shot well. We went and jump shot a few more after we picked up just so I could get my buddies dad who was visiting from out of state on some more birds. I felt bad that he spent the money to hunt and had only shot one bird. He got two on a jump and was thrilled as he has only duck hunted a couple times in his life. 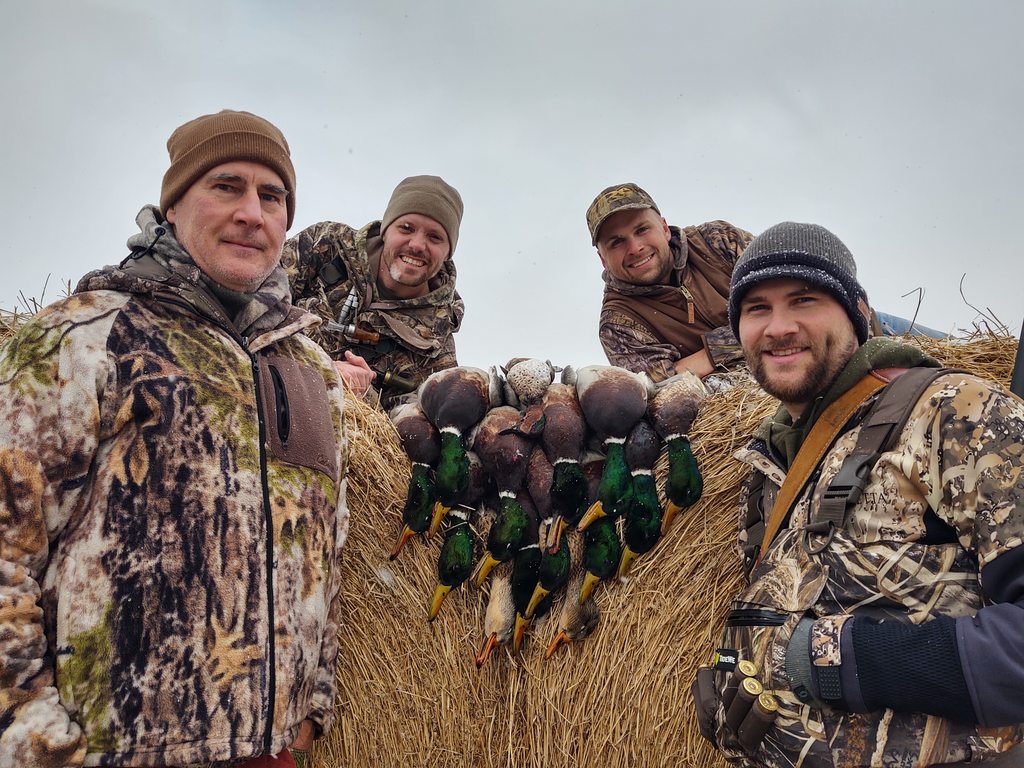 I knew when I got to the river Fri in the dark, the howling east was was a bad deal. And it was. Straight upriver right in our faces. No way around it. Nothing wanted to sit or work us. Pass shot one goose. It was banded, which was cool it was the first band of the guy who shot it. Sat was a whole diff deal. Snows and Specks, Cacks all moving early. Finally saw some mallards but they're going out to feed and coming straight back to the roost. Lots of new geese moved in. With only me n my nephew in the blind we screwed up a few but ended up shooting a handful of geese and one drake. Woulda been nice to have another caller. Had my doubts about Sun in the S wind but it stayed SW and breezy. Ran the full silo spread and it paid off. Got LOTS of good looks. Killed another handful of geese and 3 mallards. "Oh we shoulda gone on those", was the saying of the weekend. A very close 2nd was "I knew we shoulda put out the snow decoys". Wasn't a huge push but we definitely have new geese here.
You must log in or register to reply here.