We don't have any two handed spey rods, but Caleb uses single handed spey casting techniques regularly in certain situations with our 9ft 5wt. We have 7 fly rods and I'm not sure I could convince my wife I need another one. Most of our casting is fairly short, two or three rod lengths most of the time. We are almost always fishing from the boat, but sometimes have to tuck into the bank and fish toward the middle of the river, then spey techniques work better than roll casting. We generally deal with a lot of wind and getting good cast and good drift can be tough with a lot of line out. Caleb is fishing today with an uncle and the winds have been over 20mph all day, they have landed 7 along with this nice rainbow. 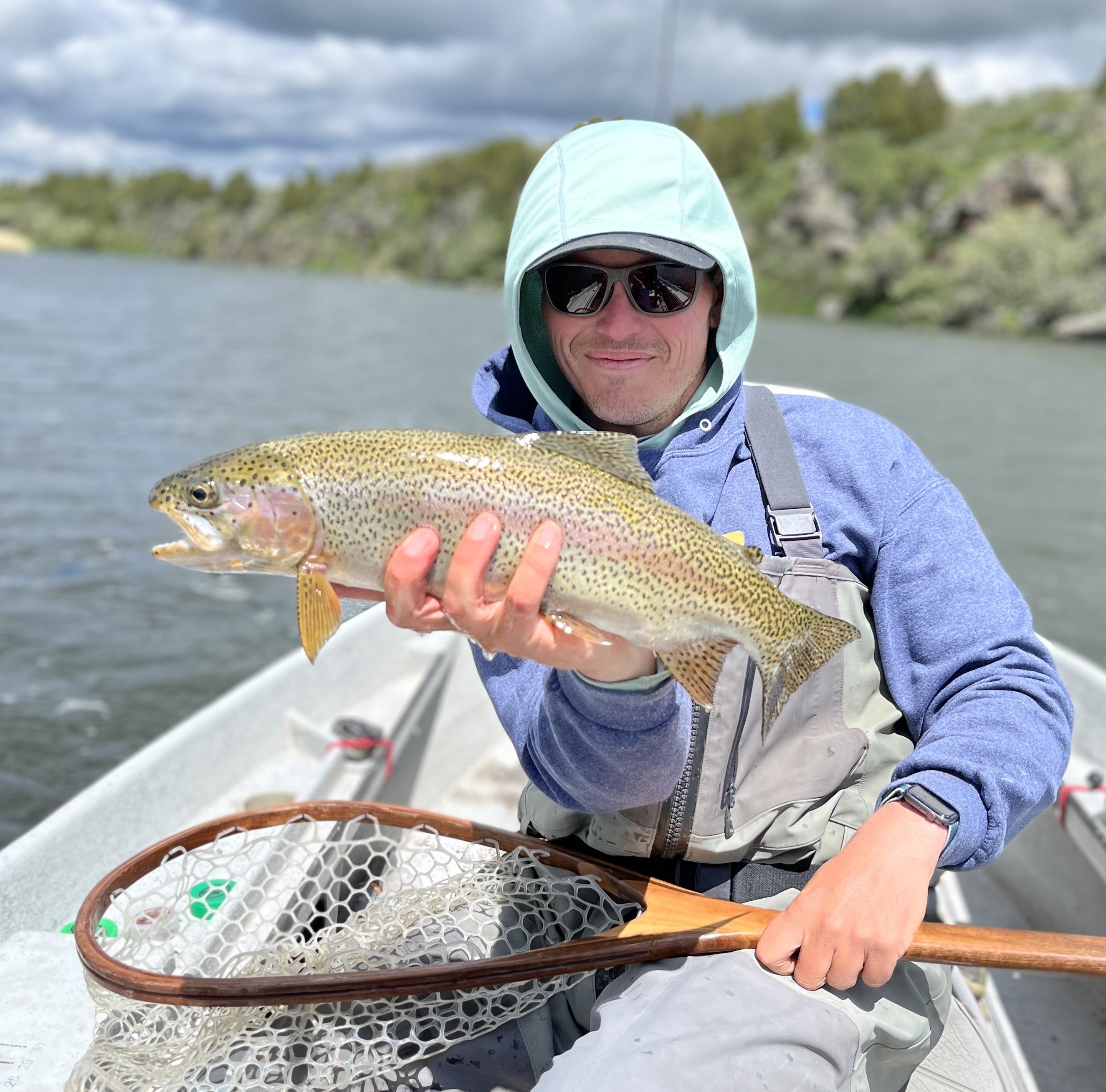 We got back at it today on the Henry’s fork. Still no green drakes and the water is super high, fast and a bit cloudy from all the recent rain. There are very few boats on the river. It took awhile to figure out what would work. I was running a golden stonefly with a dropper when out of the blue a nice brown took a swipe at it. We put a single golden on and I had 8 more passes before I finally hooked up. Caleb picked up a couple more nice browns on a rusty spinner this evening. 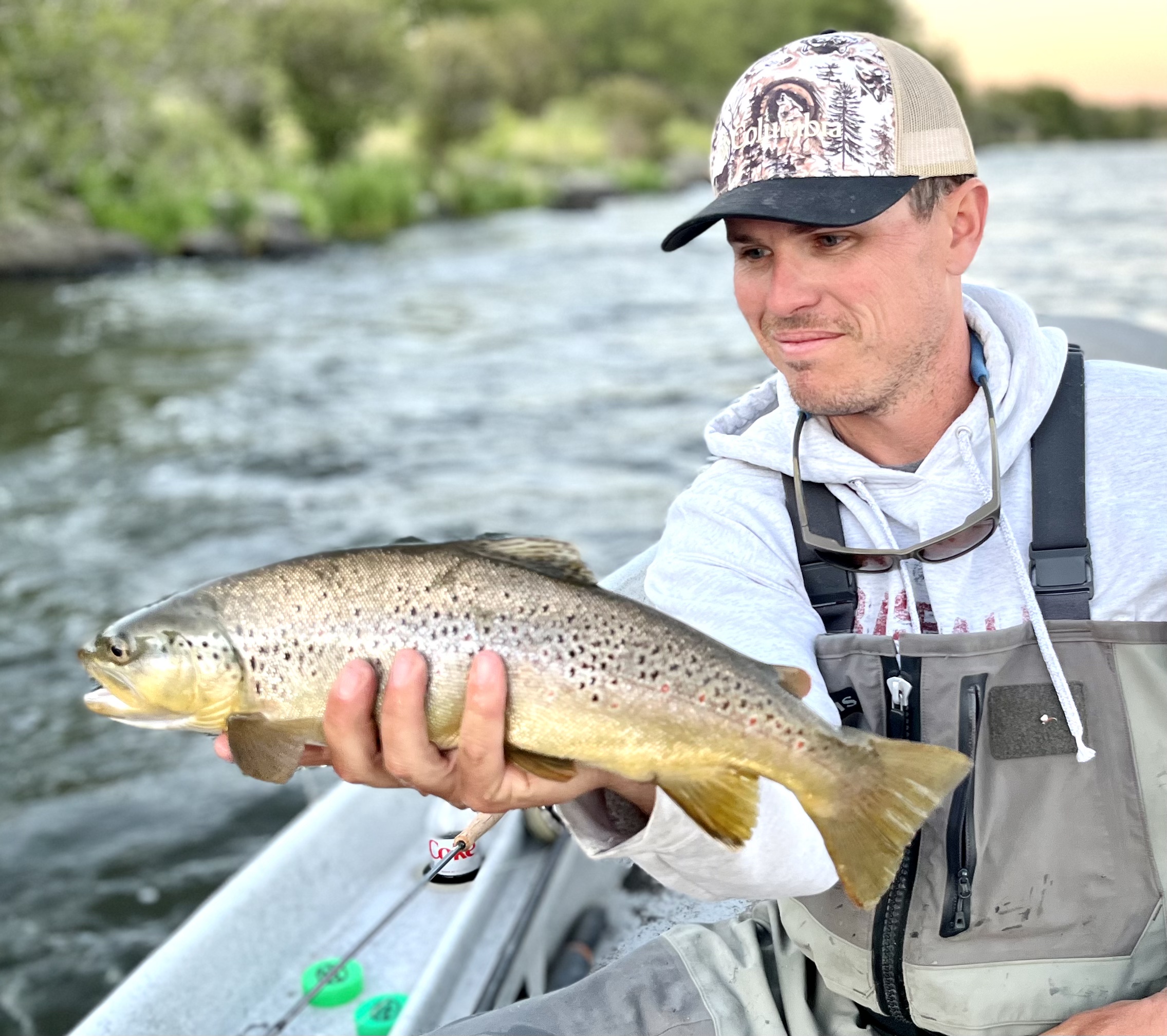 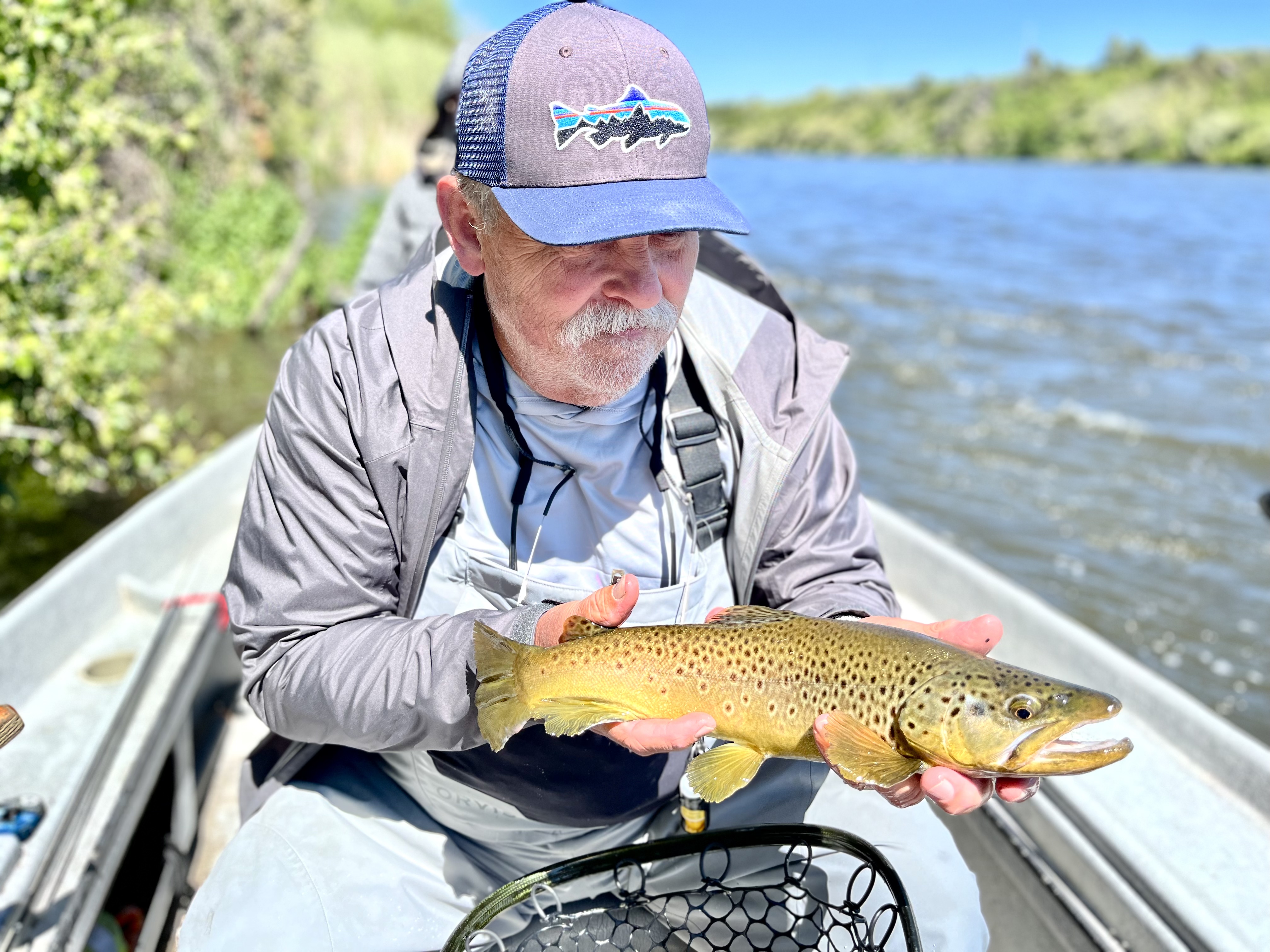 Just a few more photos and I'll quit for awhile. I'm back covering for Caleb's business again while he guides. I virtually got run off from Ashton by pollen. It is so lush and green over there that the pollen is overwhelming for guys like me. I had to move away from Kansas due to allergies and asthma. It's kind of changed my plans about moving over that way. After 3 days waiting for the green drakes I couldn't deal with it anymore and came back to the desert.

We still caught some nice fish, but I'll limit the photos to 5 on this post. Mostly brown trout, only two rainbows were caught while I was there, however Caleb caught a nice one today. Our average fish this year is over 17 inches with several 19 and 20 inch fish. In one respect it's been tough for most fishermen this year on the Henry's Fork in all sections, lots of grumbling at the ramps. A lot of that is people just waiting for a hatch of salmon flies, which didn't happen or green drakes which have yet to happen. We straight up went to dry flies which eliminates a lot of the other guys. From what we heard at the rv park there were lots of cancellations, apparently if things get tough everyone quits, which is fine with me.

Caleb has an uncanny skill of seeing fish in some of the most obscure places and we end up targeting big fish that everyone else drifts right by. Occasionally we had trouble with guys parking their boats right on top of some of the good spots, not knowing they had put their boat where they should have put their flies. Most people were either bobber fishing down the middle or sitting along the bank waiting on green drakes. We were fishing caddis and PMD hatches with great success. We will sit on feeding fish till we catch them or stick them or they quit eating. Caleb says you never leave feeding fish to hope to find more. We sat within sight of the ramp for two hours catching fish one morning watching guides put in and drift by.

The guides are predictable, get on at 9 and off at 5, bobber fishing down the middle, mostly catching rainbows. We did lots of evening floats with virtually no one around, crazy for this time of year. We floated the lower two or three times a day and shuttled ourselves. For most guides I think that's way too much work. Fishing pressure has been minimal and it was never a problem to get a few nice fish. The water was way high when I was there and pretty dirty the first couple of days, but cleared up by the third day. 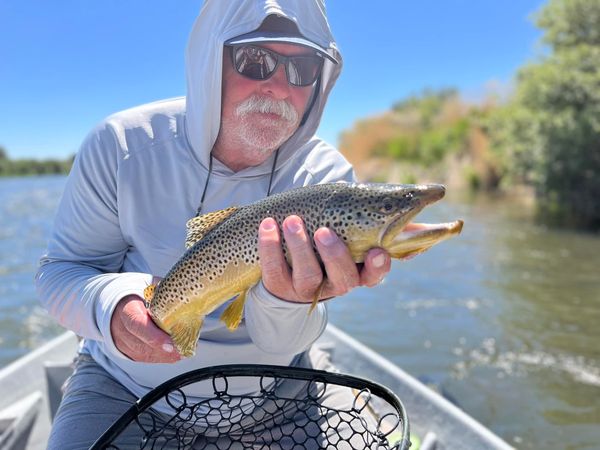 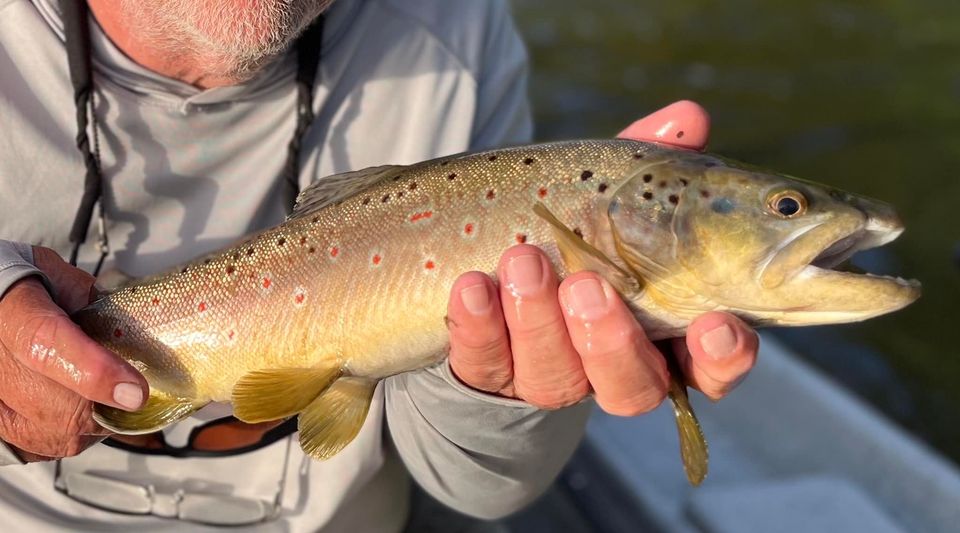 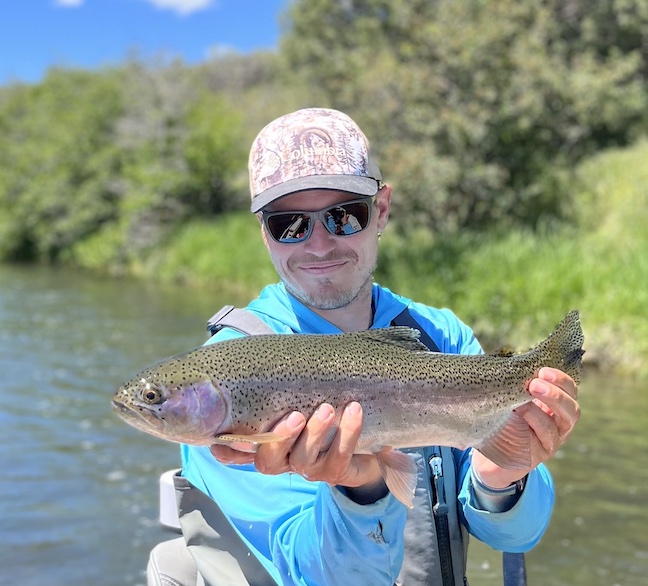 Nice to see you folks making it happen.

I'm waiting on some OB motor repairs...I hope. The cost of new motors is way past the $100 a hp that used to be the norm. Also availability still is tough.

Location
On the prairie somewhere

Love the pictures and reports! I'm looking forward to my time in Idaho in August. 12 days starting with a visit to my sis in MacKay, fishing the high country around there, then off for several days on the 'Ranch'. Then it's off to MT for 13 days before heading home. Can't wait!
"Any man who thinks he can be happy and prosperous
by letting the American Government
take care of him;
better take a closer look at the American Indian."
Henry Ford

Sounds like a great trip. We have heard some good reports from guys fishing at the railroad ranch so far this year. We did alright on the box early, but they have been messing with the flows a lot. It's been many years since I fished the high country, but it's something I love to do. My brother and I are planning a trip for August to fish grayling in some lakes close to home. Caleb is always too busy guiding in august to go, so having my brother up here will give me a chance to do that again. It will probably be nearly august before we can get up to the high country with the snow pack. The water temp on the lower henry's fork is already near 60, I'm not sure how long we will still be able to fish there. We likely will be moving down to the south fork of the snake river soon. Recreational floaters have virtually taken over the teton at Driggs, making it nearly unfishable, which is very disappointing, lots of good cutthroat in there.
M

I miss not being there. Son is going to be in your area for the 35th straight year this weekend.

tell him to fish flavs, green drakes may happen, but not yet to any degree. The lesser green drakes, (flavs) are going good in the evenings. Very few people are fishing with them. Caddis hatches are still going and an occasional fish has been on a stage of caddis. Rusty spinners work on occasion, but the last several days it's been flavs.

Fishing today was unreal. Hardly anyone on the river. We started at noon, but things really started going off at about 6pm. You could feel that there was going to be a massive hatch. We picked off fish in all the likely places. All dry fly action. Most of the fish were 17 inches or better. We caught equal numbers of rainbows and browns.

Caleb took his last float of the summer today. Fishing was great and he and some friends caught a lot of cutthroat, rainbows and browns on the south fork of the snake. He's hooking up the boat and heading home tonight and we will head back over later this week to get the camper. It's been an incredible year of fishing for us, I made about 20 trips myself and we caught more big fish than any season before. Caleb only guided about a dozen clients this spring and summer, only accepting return clients. He has decided to not guide anymore, there just isn't any money in it, especially with the cost of fuel and living expenses doubling. Things are rapidly changing in the Ashton area and probably not for the better. 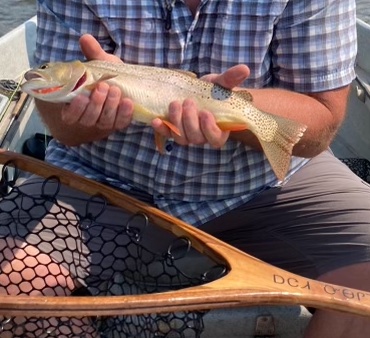