Emergency water delivery aims to help birds, fish at Tule Lake
Subscribe Today!Please read: Readers of local content on the Herald and News website – heraldandnews.com – will require a subscription beginning today. For the first few months, non-subscribers will still be able to view 10 articles for free. If you are not already a subscriber, now is a great time to join for as little as $10/month!
Tired of seeing surveys on articles? If you are a subscriber, simply log in or Subscribe now! 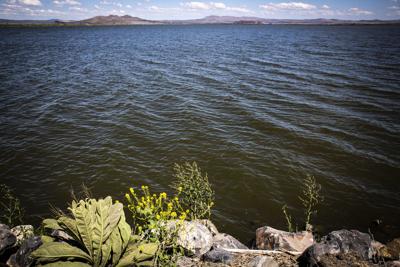 In this photo from June, Tule Lake Sump 1B had plenty of water after it was moved from across the refuge. By August the sump was dangerously low.


Water is headed to a critically dry wetland unit on Tule Lake National Wildlife Refuge to combat avian botulism, thanks to an arrangement forged between various agencies and stakeholders in the Klamath Basin.

Sump 1B, currently the only wet unit on the refuge, began rapidly losing water primarily due to evaporation and minimal irrigation diversions last month. Irrigators and waterfowl biologists had filled it earlier this summer using water drained from the refuge’s larger Sump 1A, the bottom of which had likely never been exposed to air for millions of years.

An outdated formula overestimated the amount of water available in Sump 1A, and unseasonably hot temperatures caused the smaller sump to evaporate more than expected. Though smoke and significantly reduced irrigation diversions helped the sump to stabilize somewhat over the past few weeks, a significant portion of its waterfowl habitat had already dried up. Approximately 130 endangered C’waam (Lost River suckers) in the sump also risked harm due to low water levels.

On Tuesday, waterfowl conservation organization Ducks Unlimited announced that, along with the U.S. Fish and Wildlife Service, Tulelake Irrigation District and local farmers, they had secured 10,000 acre-feet of water to deliver to the sump without significant impact to key water features in the basin.

“DU is grateful for the contributions of all local parties for their efforts in mitigating what would have assuredly become a disaster for wildlife and the local community,” the organization said in a news release.

The water will be “borrowed” from PacifiCorp’s hydroelectric reservoirs on the Klamath River, a practice that has been used in recent drought years to provide relatively small emergency flows for downriver communities, including the Yurok Tribe’s boat dance in 2020. By lowering the reservoirs by 10,000 acre-feet and adjusting flows upstream, the action isn’t expected to majorly affect flows out of Iron Gate Dam or the elevation of Upper Klamath Lake.

Water is currently leaving the Klamath River below Lake Ewauna through the Lost River Diversion Channel, entering the Lost River at Station 48 just south of Henley. TID diverts the water from the Lost River into the J Canal through Anderson-Rose Dam, after which it flows southward through the district’s laterals and gets pumped into the N Canal, which delivers it to Sump 1B.

However, the PacifiCorp reservoirs will have to be refilled later in the year, ideally following a precipitation event in the fall or early winter.

“This is water that was already in the system, and we’re just offsetting it through creative operational measures,” said TID Manager Brad Kirby, adding that he has identified ways to “pay” the water back if necessary.

Jeff McCreary, DU’s western region director of operations, said the Bureau of Reclamation performed a hydrological study to confirm that the delivery’s effects on the river and the lake would be diminutive.

“On the flipside of it, that amount of water going into Sump 1B is significant,” McCreary said. “The result of it is that you know that 1B is not going to go dry.”


The most recent counting by Tule Lake Refuge biologists estimates that more than 100,000 waterfowl are currently molting on Sump 1B. Were water levels to drop further and stagnate amid this August heat, the bacteria that causes avian botulism would be able to activate in the wetland soil and infect birds that can’t fly away. The bacteria paralyze the birds, which subsequently drown in the shallow water.

One dead bird can infect many others through maggots that eat the decaying body — healthy birds will eat the maggots, which in turn infect them with the bacteria. Refuge biologists say keeping water levels as high as possible is crucial to prevent outbreaks from getting out of control and avoiding a situation like last year, when more than 60,000 ducks succumbed to botulism on Sump 1A.

Over the next few weeks, the 10,000 acre-feet is expected to raise the sump level and improve circulation, fighting off those prime botulism conditions.

McCreary said that even with further evaporation, the infusion of water is a saving grace to birds under threat of botulism that comes “just in time,” considering the heat wave setting into the basin this week. Some temperature forecasts expect highs of 100 degrees Thursday and Friday.

“This was the only thing that could probably save 1B,” he said. “Our feeling was that hours mattered, not even days.”

Refuge biologists have collected a few sick birds on the sump, but not enough to qualify as a botulism outbreak. McCreary thinks that’s due to the previous infusion of water from Sump 1A.

“Now this water will hopefully keep it staved off,” he said.

Following diversions from Sump 1B to irrigate farmland on the refuge’s Southwest Sump, which drew ire from some environmental groups in the region, Kirby said TID instituted a cap on how much water can leave the sump for irrigation. For the past couple weeks, private well owners have been infusing the sump with more water than is leaving it, he said.

“We’ve put more water into 1B than we have taken out of it all summer,” he said. If Southwest Sump fields need to be irrigated, that water will come out of those private well flows, not the 10,000 acre-feet.

Scott Seus of Seus Family Farms said water management actions like this are part of the future of equitable communities in the Klamath Basin, where input from multiple stakeholders can inform decisions that benefit multiple species.

"Agriculture is an important part of the ecosystem both on and off the refuge," Seus said. “By working together, we've advanced this common-sense decision that will help avoid the loss of fish and waterfowl, which would have further divided everyone in the region. It's great to know that when we focus on our problems and our options, there's common ground to unite us.”

Anything is certainly better than nothing.
Pray for an early rain fellas.
Steve

were all here cause we ain't all there

What happened to CWA helping klamath

More proof the dams do more than just supply clean and reliable power. Let’s tear them down though. 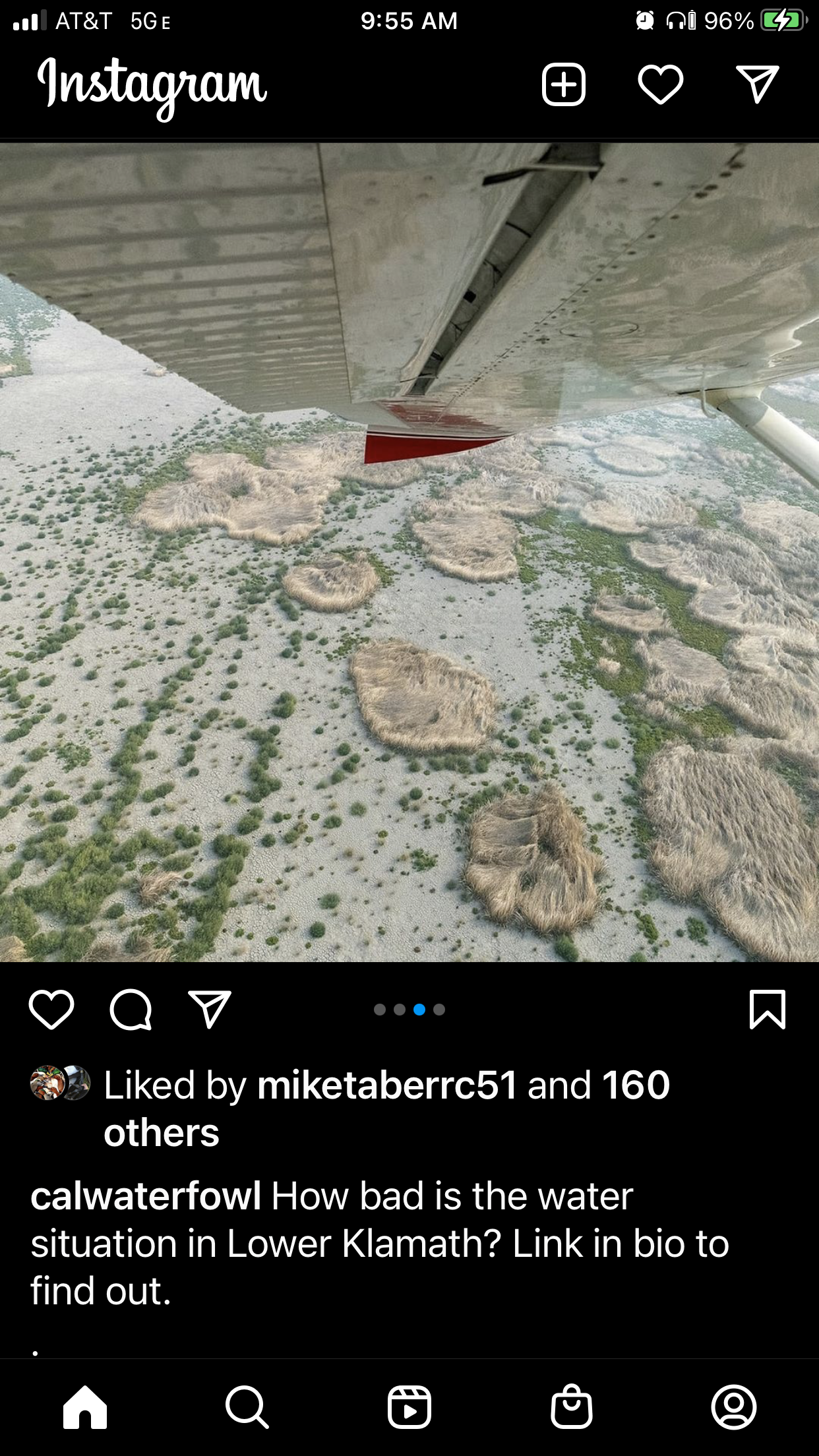 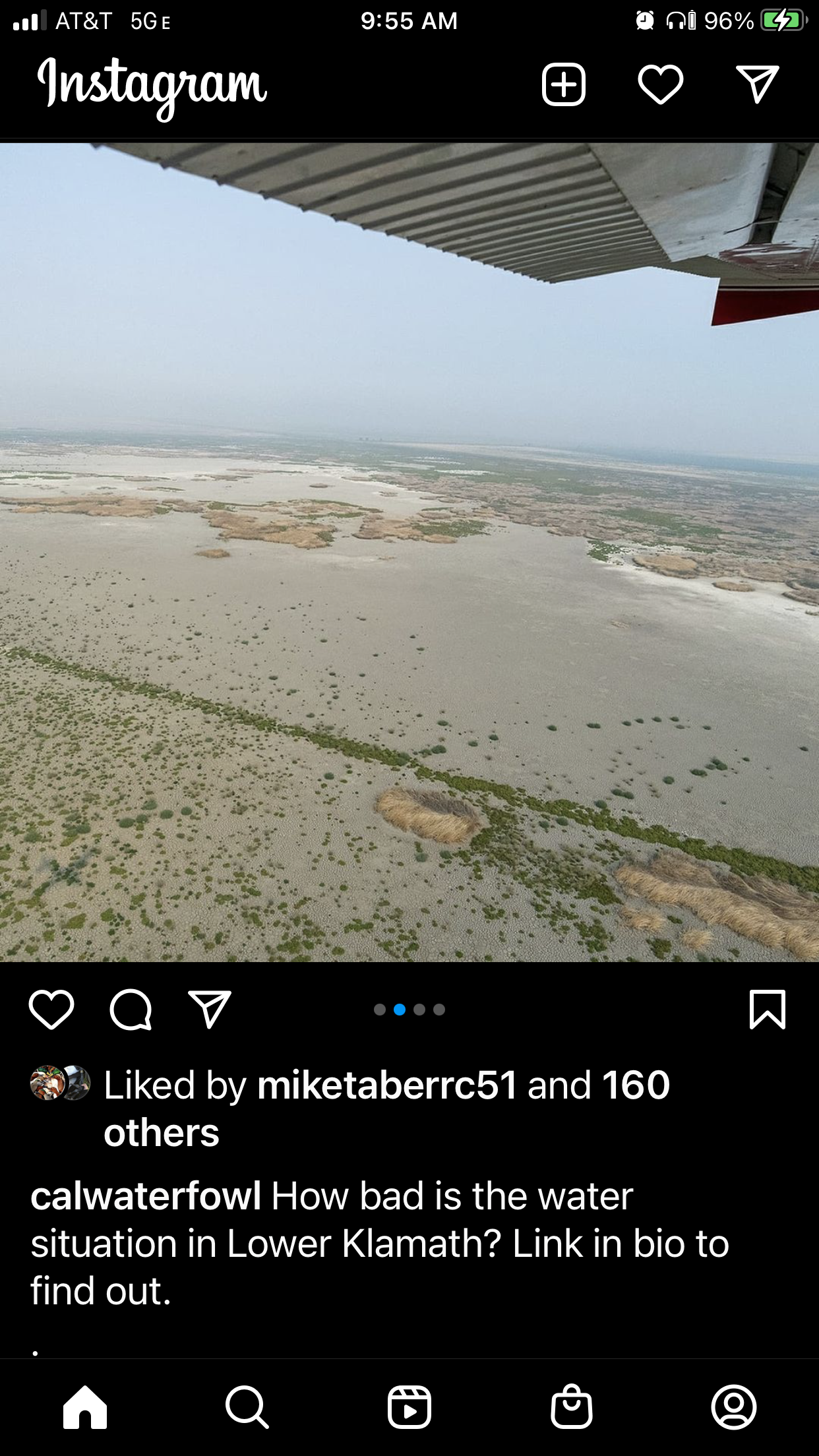